You are here: Home / Airports / Murcia Airport has moved from San Javier to Corvera

The airport terminal is 28,500 m²  which is much larger than the old airport at San Javier. The old airport closed on 14th January 2019 and all passenger traffic rerouted to the new airport in Corvera. It can cater for over 3 million passengers per annum and flights are provided by Ryanair, easyJet and Jet2.com.

Facilities at the New Murcia Airport

Murcia Airport is located in Corvera approximately 40 km north west from the old San Javier Airport. While the new airport is closer to the city of Murcia it will take longer to reach the seaside resorts of La Manga, Los Alcázares and Torrevieja. Please see the distance in kilometres below.

Location of the new Corvera Airport

The map below show the new and the old airpots at Murcia. The new airport is 40 km away. 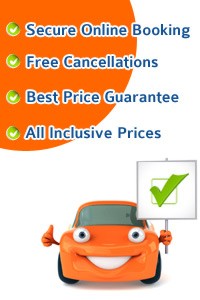